Gold medals for the Parterre Chardonnay

"This is a first class Margaret River Chardonnay with a proven track record... 96 points" says James Halliday in his latest Australian Wine Companion.

It's an honour to be amongst the crème de la crème in both competitions.

The 2017 Parterre Chardonnay is available to buy online here. 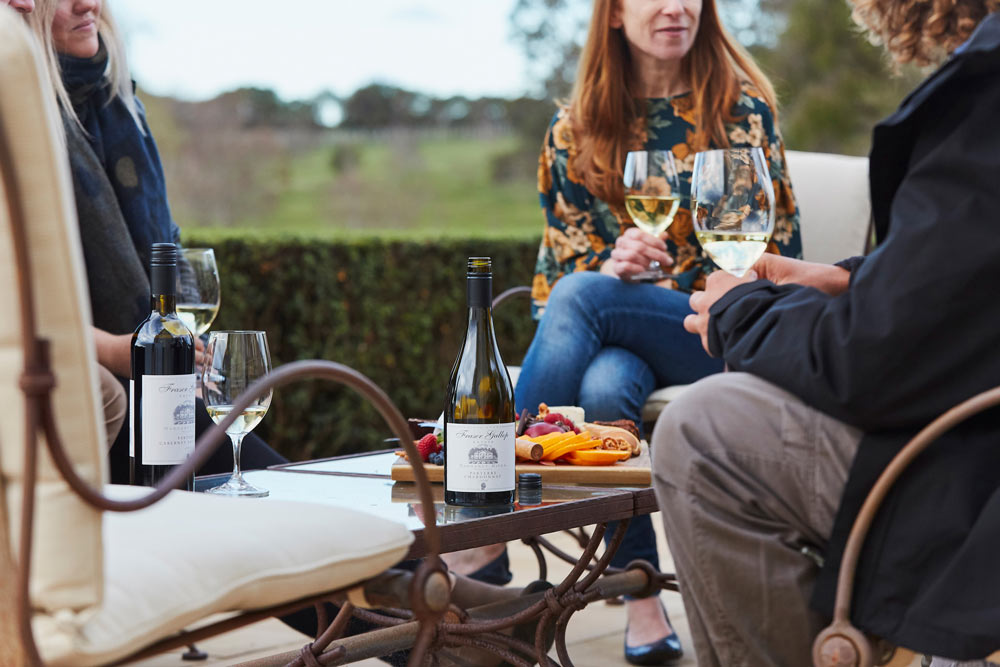 What a splendid day for the Open Garden Fundraiser, and thanks to everyone who attended.

Together we raised $1530 which helped Lily and Jessica attend the national equestrian championships in Melbourne. The girls are very grateful.

Thank you to Dorothy and her friends for the delicious sandwiches, sausage rolls and raspberry friands.

Special thanks to Chris Spiker, a guest who took these delightful photos. Chris is also a talented artist who creates the most exquisite paintings of birds. He exhibits at Boranup Gallery and we recommend visiting his studio at Margaret River Region Open Studios next year!

Fraser Gallop wines are among the best value in the region, and this one is typical. The youthfully subtle bouquet has elements of cashew, almond, honey and butter while the palate is lively with mouth-watering acidity and is tense, refreshing and invigorating. A fine modern chardonnay. (Screwcap)

Would the clarity and focus of the Margaret River wines stand out from the crowd?

Victoria Moore attended a series of wine tastings in November 2017 to celebrate the Margaret River wine region's 50th anniversary. The 32nd annual Cullen International Chardonnay Tasting was hosted by Vanya Cullen who had selected 22 chardonnays from Australia, France and the US.

Below is an extract from Victoria Moore's column in The Daily Telegraph, July 2018. Read the full article.

"Every so often, an online commenter asks why anyone would be interested in chardonnay when sauvignon blanc (and other grapes) have all the verve and freshness you could ever want (especially, you might think, in this heatwave). This week’s column begins with a riposte to that from Cliff Royle at Flametree in Margaret River (you need to turn on your internal Australian accent as you read in order to do it full justice).

“People tell me ‘I’m ABC’ – anything but chardonnay – and I say, ‘You know what, you need to do yourself a favour and get over that quite quickly because chardonnay is the greatest white wine grape in the world and, yes, I’ve had some nice rieslings, and some nice other whites, but the greatest white wines I’ve had have all been chardonnay. Yes, I understand you fell out of love with it because a lot of wines were over-oaky and clunky, but that’s not where we are now.’”

Wines of the Week

95 Pts for the Parterre Cabernet

What a thrill - Huon Hooke awarded our 2014 Parterre Cabernet Sauvignon 95 points, and described it as "beautifully flavoured and intense in the mouth, poised and elegant with tight, refined structure and good persistence."

This is the same vintage that won Gold at the Margaret River Wine Show in 2017, as did the 2013 and 2015 vintages. We eagerly await another stellar review in the Australian Wine Companion next month, and urge you to stock your cellar before it runs out.

Meanwhile, Hooke rated the 2017 Parterre Chardonnay 94 points, and said it was "top value for money".

Medium to deep red/purple colour, bright and fresh, while also describes the nose, which is very aromatic and has charming floral violet overtones over raspberry and mulberry-like fruit. Hints of vanilla, briar and cedar as well. The wine is beautifully flavoured and instense in the mouth, poised and elegant with tight, refined structure and good persistence. It's tightly coiled and compact, and promises to richly reward cellaring.

Light straw colour and a shy, faintly nutty savoury bouquet, which grew and grew as the wine aired. Complex cashew, almond, honey and butter nuances later. The palate is bright and enlivened by frisky acidity, which helps extend the finish. It's mouthwatering and tense, refreshing and invigorating. A lovely modern chardonnay, even better with fish or seafood. Top value for money.

She attended the Cullen Wine International Chardonnay Tasting, an event started by Dr Kevin Cullen in the mid 1980s to 'benchmark Margaret River Chardonnay against the world's finest examples and improve the breed'.

Jancis tasted the Fraser Gallop Estate Parterre Chardonnay 2013 in a blind tasting that included eight wines from Margaret River, seven from the rest of Australia (mainly Victoria), one from California, one from Oregon and five from Burgundy.

Jancis states "virtually all my favourite Chardonnays came from Margaret River – scoring them more highly than several grands crus or their equivalents from Burgundy, including wines from such illustrious producers as Leroy and Leflaive. And if we were to take price into account, this tasting is a walkover for Margaret River."

We are delighted to have one of the highest rated Chardonnays in the tasting. While the 2013 vintage is no longer available to purchase, you may see it on the menu at future wine dinners and Gourmet Escape events.

In a separate tasting at Vasse Felix designed to celebrate the region's half-century, Jancis sampled the Parterre Chardonnay 2016 and had this to say;

Fraser Gallop, Parterre Chardonnay 2016 Margaret River
Gin Gin clone. Metricup Road vineyard, Wilyabrup. Winter rainfall arrived early in the season, which then eased off in the later half and into spring. This provided the region with a warmer than average  spring; predictions for another early vintage were being made. Rain returned in December, and the weather returned to normal through to the second week of January. Harvested February 2016, 10 months in new and older French oak barriques.
Pale straw. Quite heady nose – almost as though there were a drop of Viognier in there. Very neat and pleasing with a vegetal note. More evolved and come-hither than some although there is excellent acidity underneath. Not quite the follow through one seeks though it may well develop it. 13.5% Drink 2017-2023
Score: 17+

The Fraser Gallop Parterre Chardonnay 2016 is available to purchase online and at cellar door.

Jancis Robinson visited the Margaret River region as part of the 2017 Gourmet Escape food and wine festival. She

tasted the Parterre and Palladian range in the barrel room, and shared her thoughts on the quality of Fraser Gallop Estate and Margaret River region wines.

This is an extract from her article "A Margaret River Assortment" published on 4 January 2018.

Entrepreneur Nigel Gallop is a major force in Margaret River. He hosted the massive opening party for Gourmet Escape in the grounds of his neo-Palladian villa, so extensive that we all had to be shuttled in from the car parks. The 20-ha estate is located on the highest point in the Wilyabrup subregion (I heard surprisingly little discussion of subregions during my recent visit, perhaps because harmony was the prime aim of these half-century celebrations). This means that, although Fraser Gallop is 7km from the coast, its elevation means it is affected by many an ocean breeze. All vines here are dry-grown. The dominant variety is Cabernet Sauvignon, grown on 9 ha (22 acres), supplemented by other red Bordeaux varieties and 7 ha of Chardonnay.

The extremely dedicated winemaker is Clive Otto, who moved here from Vasse Felix in 2006. He revels in using different sorts of barrels - seven in all, many on rollers for ease of access - for each of the wines he makes. He sells barrels as well as making wine so, as he puts it with a smile, 'I know what everyone else is doing'. He did the 2009 vintage at Domaine de Chevalier and the 2014 one at Pichon Baron and was particularly interesting (to wine students anyway) on comparisons between what is done at this Pauillac Supersecond and what he does for his Parterre Cabernet. Pichon Baron crushes fruit whereas Parterre is whole bunch. At Pichon they start fermentation straight away but for Parterre he imposes a four-day cold soak. At Pichon, innoculation encourages malolactic conversion at much the same time as alcoholic fermentation whereas it takes place afterwards for Parterre. The Pichon fermentation is a bit warmer than Parterre's and Pichon is pressed sequentially to barrel so all barrels are different whereas Parterre's identical barrels are filled from one big tank. Pichon spends 12 months in oak, Parterre 18.

He sees himself as a Cabernet specialist and claims that the new policy of producing three levels of Cab - Estate, Parterre and a new top-of-the-range Palladian - was inspired by the strict selection at Pichon. But note from my tasting notes that the most basic level, Estate, is made in very much smaller quantity than the Parterre.

Their least profitable wine in view of the oak use. They persist because Margaret River needs to be known for this style. Mid gold. Lightly floral. I could almost take this for a Grosses Gewächs Riesling! Great composition. Lovely already. Drink 2017-2025
17.5
Sold out, available at the Pop Up Barrel Room event 2-3 June 2018

Finished, not made, by Clive. Made at Bruce Duke’s contract facility. They used lots of (70%) new oak. Big, round and sweet. Sweet and far from the most refreshing. Bit astringent on the end. Drink 2009-2016
16
Sold out

Now 30% new oak, picking earlier and wild fermentation. 50% large-format oak, backing off on toast. Not much malo for any of Clive Otto’s whites. They’re not big on lees stirring. Light quinine finish. Lots of acidity. Drink 2016-2022
16.5
Sold out

Butterscotch nose and then lovely tightness and freshness. Green vegy and tightens up on the finish. Salty finish. Long and fresh. Drink 2017-2023
17
Sold out, you may see this vintage at future wine dinners

Floral and bright. Big and round. Bony and explosive. Worth comparing it with a burgundy grand cru? I also tasted it at the ‘50 years of Margaret River’ tasting where it looked very good too. Drink 2018-2025
17.5
This is the current vintage, available to purchase online and at cellar door

85% Cabernet Sauvignon plus Cabernet Franc, Merlot, Petit Verdot and Malbec. Some left on skins for as long as 40 days. Very dark crimson. Nicely developed. Lots of fruit sweetness in youth and then dry finish. Crisp and brisk. Real energy here. Drink 2012-2020
17
Sold out, available at the Pop Up Barrel Room event 2-3 June 2018

A warmer vintage than 2014 and a smaller crop. Deep crimson. Nice subtle nose with a hint of iodine. Racy and lifted. Lovely blend of ripe fruit and dry tannins. Drink 2018-2028
17.5
Sold out, this may be served at future wine dinners

Less concentrated than the 2013. Round and fruity. A bit inky. Pretty dry end. Not very graceful at the moment. Needs time. Drink 2020-2030
16.5+
This is the current vintage, available to purchase online and at cellar door

First vintage of a new line, less expensive than Parterre and modeled on techniques Clive Otto observed when working the 2014 vintage at Ch Pichon Baron. Vines planted 1998 and 1999. 160 cases. Quite green Cabernet fruit picked in mid March. Then sweet and round and fresh on the palate. Mid intensity. Drink 2017-2021
16
Sold out, 2016 vintage will be released soon

This will be the debut vintage. 100% 500-litre puncheons. Will be bottled in three weeks. Big and rich and gorgeous with masses of acidity. Exotically floral. Drink 2019-27
18
Due for release late 2018